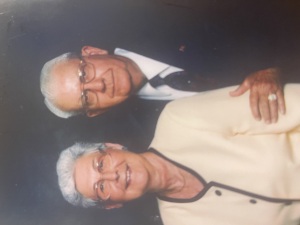 Audrey Lee Jensen Powell passed away at her daughter's home in Thomasville, Alabama on Tuesday morning, June 21, 2022 at the age of 89.  She was the baby of five children and is the last family member of her generation to pass on to her eternal home in heaven.

Born on October 4, 1932 in Albany, Nebraska, to Niels Christian Henry Jensen and Nannie Mae Gray Jensen, Audrey and her family moved to Crawford, Mississippi when she was just two weeks old.  Her oldest sister, Myrtle, held Audrey on her lap on a pillow for the long journey. Her siblings were, Nels Gray Jensen, Myrtle Henley, Dorothy Spurgeon and Eugene Jensen.

At the time of her death, Audrey was a member of Forest Avenue Baptist Church. She served her Lord and Savior well throughout her life as she served alongside her husband of 51 years, Pastor Robert (Bert) Powell. She graciously used her gifts to enhance his ministry and to bring glory to God. The couple met at Mississippi College and after their marriage in 1953, they would go on to have four children, Kari (Howell) Kirby, John Christian Powell, Nancy (Darren) Gill, and Robert Carey (Roxie) Powell Jr.  Audrey also shared a special relationship with her niece, Frances Erickson.

Audrey accomplished her goals in education, receiving two master’s degrees that she completed while raising her family. She was an accomplished pianist and organist, sharing her talents with many churches throughout the years.

After serving the Lord as a pastor’s wife and sacrificially raising her own children, Audrey dedicated her 31 plus year career teaching, predominately the third grade at Joe M. Gilmore School.

Five Great Grandchildren with one on the way

Preceded in death by:

The Alabama Baptist Children's Homes is suggested by the family for anyone who would like to honor the memory of Audrey J. Powell.

To send flowers to the family or plant a tree in memory of Audrey Lee Jensen Powell, please visit our floral store.

A Memorial Tree was planted for Audrey